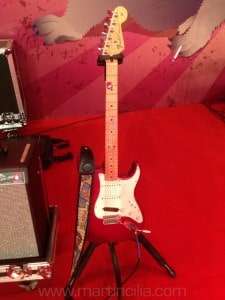 After an afternoon sound check to acclimatize ourselves with the hire gear we would be using that night, it’s back to our hotel room for a little rest before dinner. We had a room set up for us on the same floor as the gig where we could hang out and have dinner and a few drinks. I noticed that they gave us VB beers, a local beer to Australia often favored by uni students for it’s cheap economic factor. I suggested that they should exchange the VBs for something drinkable telling the Chinese waiter that VB stands for “Very Bad”. For dinner we were served ‘some sort of meat”. It was something we’d never tasted before but didn’t want to ask! It was quite nice all the same. 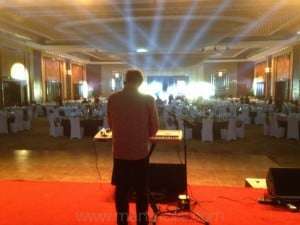 We opened our set with “Too Many Times” and the crowd were with us from the first note, dancing and singing along. The audience was made up of mainly Australians, New Zealanders and Chinese people who had lived in Australia and returned to China. One thing I did notice was that there were always plenty of staff around, whether it was to set up a microphone or serve dinner. At one point I watched as six people were adjusting a drum mic, it’s reminded me of Australian road workers as you’d often see one person doing the work as the others stood by.

All in all a fun night was had with a popular drink selection for the evening being a gin and tonic. The crowd were still partying as we headed back to our rooms to catch a few hours sleep before heading to the airport at some ungodly hour.

A short video of Let’s Cook

Mental as Anything at the Aussie/New Zealand Ball in #Beijing pic.twitter.com/Ec8befhrYF