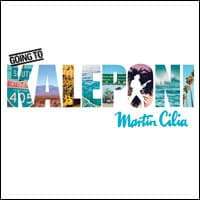 Released on the BOMBORA label April 2013

Okay, a personal trip here for me.

And who the hell are they you ask? Well, if you’re under 50, then forget it!

Gardner McKay played “Adam Troy”, the captain of the schooner Tiki in the late ‘50s/early ‘60s American television series Adventures In Paradise, and Clint Eastwood played “Joe,” “Monco” and “Blondie” in a series of ‘60s Italian Westerns with music provided by Ennio Morricone.

And what have they got to do with this bountiful explosion of fifteen surf instrumentals?

Well, “Adam Troy” and the Tiki used to ply their way around the Islands, getting in and out of trouble. There were even trips to friendly Dutch run Java when the surf in nearby Bali was still untapped and even Alby had not made the effort.

The sound of Adventures In Paradise and that exotic island “chill” is what GOING TO KALEPONI is all about, tinged with a Western styled sound that Clint would be proud of – hence his inclusion here because Italian music maestro Morricone provided all the music for Clint’s Spaghetti Western period.

Interestingly, over the years, that sound has found its way into contemporary surf music, a point no doubt not missed by Cilia who has explored many differing sounds and styles – albeit with only a guitar in his hand – over the years.

You will find amid this selection of tunes on which he is supported by Lloyd Gyi on drums, a bit of everything – from the Adventures In Paradise styled sounding Ocean Guitar, to the galloping Pecos sound of some distant part of Spain masquerading as Texas in tunes like Koko Head and Hawaii Western, to mellow, soothing and melodic soundscapes like End Of Summer, the opener Makua Beach and Hawaiian Moon with its percussive tapping reflecting the rise and fall of us old teabags out the back enjoying an early morning or late afternoon glass-off.

There’s even a couple of bouncy road trip (remember the surfari?) numbers such as the title tune Going To Kaleponi, See You In Five and Shore Enough; even the odd Spy-sounding Walking In Sand (I too am waiting for Ursula Andress to emerge out of the surf) and some blistering primo surf instros like Waves Of Thunder and (the obvious) Mrs. Moto that would even make Cilia’s old (no offence guys) buddies The Atlantics jealous.

For Cilia, this collection of tunes is not only a change of pace musically and a diversion in direction, but another example of the guitarist’s dexterity and creativity in a musical genre that claims him as one of its leaders.

Oh, almost forgot, “Kaleponi” is Hawaiian for California…. where surf music truly began, ironically so many summer’s ago during the same period “Adam Troy” was plying his wares from island to island.