The original Fender Stratocaster. Fender got it right first time. Read more about it at www.1954stratocaster.com

I’m of the opinion that the design of the Fender Stratocaster guitar was 100% correct from the very first released production models in mid 1954.

I have an original ’54 (May) Strat and it sounds as good as any strat gets. It doesn’t have modified wiring, extra string trees, fancy tuners, push/pull knobs, larger frets, boutique bridge or block or any other ‘modifications’. 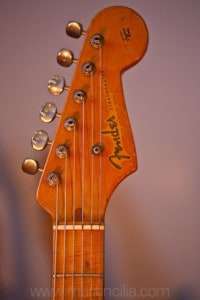 The ‘real’ decline of the Fender Stratocaster started with the introduction of the extra string tree in mid 1972, it was unnecessary and the model started to really decline when the 5 way pickup selector switch was introduced mid 70s. After that, apart from the early ’62 vintage reissues released in 1982, a strat wasn’t a strat anymore.

Another mistake is turning the 21 fret neck into a 22 fret neck, why? Commercial reasons I guess? It only gets in the way of the 21st fret. Totally unnecessary in my opinion.

I have no problem with a Gibson 22 fret neck, they were designed with that in mind, the Strat wasn’t. I’ve noticed that Fender have been making some good guitars in the past few years, I’ve played a few Fender custom shop reissue guitars and they have been quite good although I’m not sure where they’re taking their neck shape and profile from? I own or have owned original Strats from every year from 1954 to 1982 and they’re not how any of mine are.

Another thing I’ve been saying for years is that the metal used to manufacture the guitar parts is different from the 50s / 60s. This includes pickup wire, bridge and block, frets, tuners, everything. Now, I’ve had people laugh when I’ve bought this up but try this – get a 50s or 60s original metal part i.e.: screw, bridge saddle, springs etc. Tap them and listen to the sound they make, it’s different to the new ones right? Drop them both on the floor and they sound different.

This applies to Gibson also.

In my opinion, I think guitar players in general have been worrying about the wrong things with regards to instruments and should think about the music a bit more and communicating that music better.