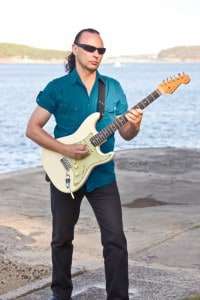 Martin Cilia is Australia’s premier surf rock guitarist and also member of legendary Australian surf band, The Atlantics. He talked to us about his new album and upcoming gigs.

Tell us about your background.
I grew up in Perth, Western Australia and started to learn guitar in the early 70s. I got into playing in bands while I was still at school. By the early eighties, after a year in the UK, I was playing in top bands around town. I played in both cover and original bands.

I moved to Sydney in December 1989 and throughout the 90s did numerous recording sessions playing guitar. In the late 90s I joined The Atlantics and have recorded a large body of work with them. I have also toured both nationally and internationally with them.

So you have a new album out…
I have a new album called “Surfersaurus” which is a mixture of covers & original songs, including Telstar, Misirlou and Wipe Out. With the cover tunes I have put my mark on them while still respecting the original versions. It’s out on the Bombora label July 1st 2011.

I hear it was recorded at Jim Moginie’s [ex Midnight Oil] studio – how did that come about?

Yes, it was recorded at Jim’s Oceanic Studio in Sydney, a great studio with ‘old school’ mentality, which suited this project perfectly. Jim also helped me out by playing on a couple of tracks.

What gear did you use for recording?
The main guitar was my white 1961 Fender Stratocaster, I also used a 1963 and 1954 Stratocaster on a few tunes as well. I almost forgot, for some of the bubbly rhythm parts I played my 1963 L series Fender Jaguar. There were appearances from a 1954 Gibson Les Paul goldtop, a 1962 Gibson SG/Les Paul and a 1964 Gibson 335 on a few tunes.

As far as amps go it was mainly Vox AC30’s, with AC15 & AC10’s also making an appearance and an occasional Fender Blackface Super Reverb and 1963 Vibroverb.

Do you have any gigs coming up?
I’m looking forward to playing Spensers Live – Saturday 11th June 2011. There will be a few special guests joining me on the night. People can follow me on Twitter for the latest info, I’m @surfguitar.